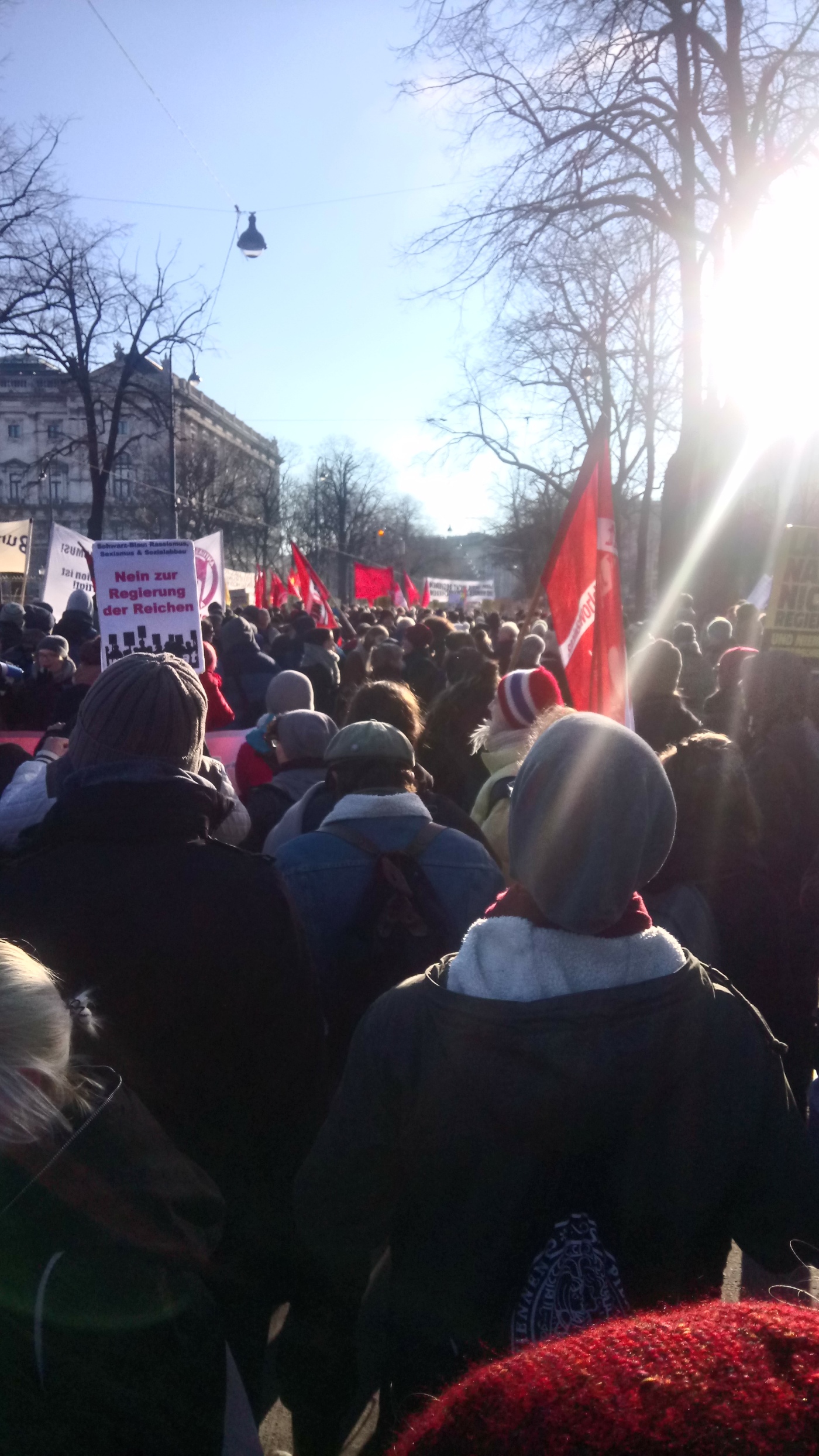 Today I was on the street. I joined the protests against the new Austrian far-right government. It was very important for me to go there and fortunately, I was able to shift work to the afternoon. I did not want the government to not be sworn in. It was elected democratically and built in a righteous way. Still I believe, that this government, that consists of a right and far-right party, will bring many negative developments for a big quantity of people. I wish for an open and progressive society but I observe the opposite every day. We live in a time of change; the old days where economic growth and rising prosperity was a matter of facts are over. People are scared of these developments and they want to shut all the problems out – but that is not possible in our globalized world, at least not for long. Denying the fact, that thousands of people on this world are on the run because of conflicts that are somehow connected to the “north” (economically, politically or environmentally), is a step away from a solution. It scares me, that it becomes accepted to see people, no matter if it is refugees, immigrants or other groups, not as human beings with needs and feelings, but as enemies that want to come to our country and steal everything off us. Instead of solidarizing with the poor, the “middleclass” is so scared to share a bit of their own, that they cling to rich and powerful people and do as they say. How can someone from the working class truly believe, that this government is on their side, that it will listen to their needs and concerns and will distribute some of their wealth and advantages.

Thinking about democracy, I ask myself a very fundamental question:

In school I learned, that the seats in the parliament are filled with different person so they can represent the different people in a country. And I, as a citizen, elect that person or party which I think will represent me in the best way. But I have to ask how I decide who I will elect – for me there seem to be two possibilities.

Let me give you an example:

Party A promises that everyone who is born in January will receive 1000€ per month as a present and all the others have to pay higher taxes.

Party B says that this is bullshit and that they will prevent it no matter what.

But does everyone, that is allowed to write down a X on election day think like this? Believing in the free market and the invisible hand, which became intrinsic to our capitalist society, one should think that it will lead to the best regulation if everyone follows his and her own interests. However, we are social entities that live linked to other people. I just don’t believe that our society can work if we just think about ourselves.

But how did the majority of the people, who voted for our new government, decide who they were going to vote? Did they use the thoughts (1) or (2) for their decision?

I think that, as long as this question, on how we should decide which party we want to elect, is unanswered, democracy can become a hollow and very dangerous tool. Only because a majority of people want something, it is not automatically the best decision. And people can easily be tricked into believing something or information can be kept away from them. We have seen all of this in the election of Donald Trump and new forms of media make this even more difficult.

Democracy needs to be linked to high quality education for everyone and to compassion for your fellow citizens, but also for people we are connected with, even worldwide.

I have the feeling that I have brought forward many questions that I cannot answer and now my brain feels a bit lost. I would be truly thankful if you had any opinions or answers for me 😉